This is the first of a two-part series on a humanitarian trip inside the Russia-Ukraine war taken in March by Moody graduate Matt Snyder ’13 and his wife, Lily.

When Russia ignited war by invading Ukraine on February 23, Matt and Lily Snyder couldn’t sit idly in the comfort of their Chicago home and watch tragic events unfold. They took their support a bold step further—and 4,700 miles farther.

Matt Snyder ’13—an instructor of Communications at Moody since 2020—and his wife flew to Poland to serve Ukrainian refugees March 5–12 during Moody Bible Institute’s spring break. Their trip was eye opening, emotional, and life changing, and they plan to do significantly more for Ukrainians in the near future as God directs them.

‘I want to support my people’ 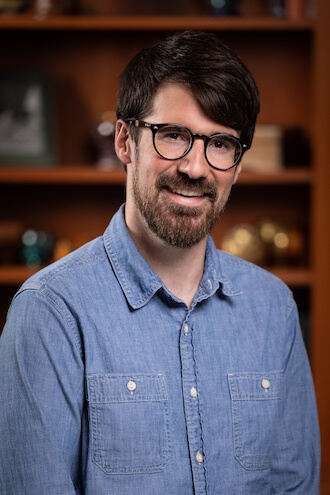 Lily was born and raised in Kyiv and lived in western Ukraine for several years with Matt after they married. Russia’s assault on her homeland has devastated the lives of countless friends and family members. Once the war began, Lily told Matt “I want to support my people” as a translator for refugees. Matt accompanied her to assist however he could.

“We weren’t worried about our safety,” Matt said. “At this point western Ukraine is much safer than the eastern regions.”

When the Snyders arrived in Poland March 5, most flats and hostels were full near the border. They secured modest accommodations 90 minutes south of the border town of Medyka. Their first impressions of the refugee crisis in Medyka were unforgettable.

“Buses and trains operated throughout the day, so the lines of refugees remained relatively short,” Matt said. “But as evening came, the bus and train schedules slowed down, the lines swelled, and those not wanting to lose their place in line stood out in the cold as snow fell. Others huddled in large tents, laying on cots or in sleeping bags to warm up.”

The Snyders witnessed firsthand the sense of desperation that persistently haunts refugees each day of the war.

“Ukrainian refugees stood in line for hours to cross the borders on foot,” Matt recalled. “Many waited from several hours to several days to cross the border in their cars. Most Ukrainians had just the coats on their backs and a suitcase or backpack of belongings. Some were dazed, frantically asking when they could return home, or if they’d ever return home at all.”

Lily and Matt then ventured inside western Ukraine for two days to visit church families and ministry partners. One organization leased a small hotel to supply rooms for church families forced to evacuate their homes in Kyiv.

“We worshiped the Lord in song together and gathered in His Word,” Matt said. “Taking a break from news stories bombarding our telegram channels and inboxes gave us tremendous peace being with God’s people who were far from their homes.”

In the midst of a brazen Russian conflict that has left 10 million Ukrainians displaced and thousands killed, the Snyders observed uncommon courage among refugees and aid workers.

“The refugees from our church family don’t complain,” Matt said. “They are weary from grief and exhaustion but continue to gather supplies and send them to others we know on the front lines in hotspots. The young adults worked tirelessly to organize relief efforts, sending humanitarian aid and medical supplies to cities. Many fathers and husbands make trip after trip into dangerous zones to deliver supplies and evacuate people out of immediate danger.

“The web of God’s people working together is a beautiful sight to behold.”