Brandishing the Japanese Jō staff, eighteen burly men learn martial arts for a recreation club in 1925. The experimental program was well received, and a year later Moody offered academic courses in Recreational Leadership, “to interest and command groups of boys and girls on outdoor excursions and summer camps.”

Classes were held in the campus gym, located in the basement of the Men’s Dormitory. The building was later renamed in honor of William Norton, who served as head of the Bible Institute Colportage Association for 50 years. When Norton died in 1948, he was the last employee to have been hired by D. L. Moody himself.

Norton Hall was demolished in 1970, now replaced by the Alumni Student Center building. 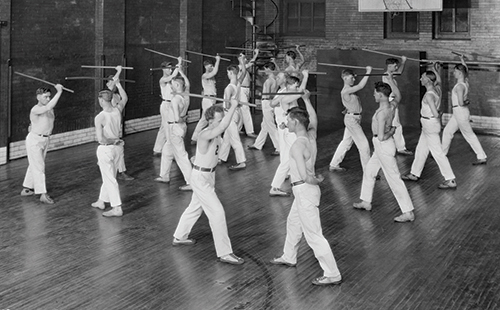