COURAGE AND COMPASSION IN UKRAINE 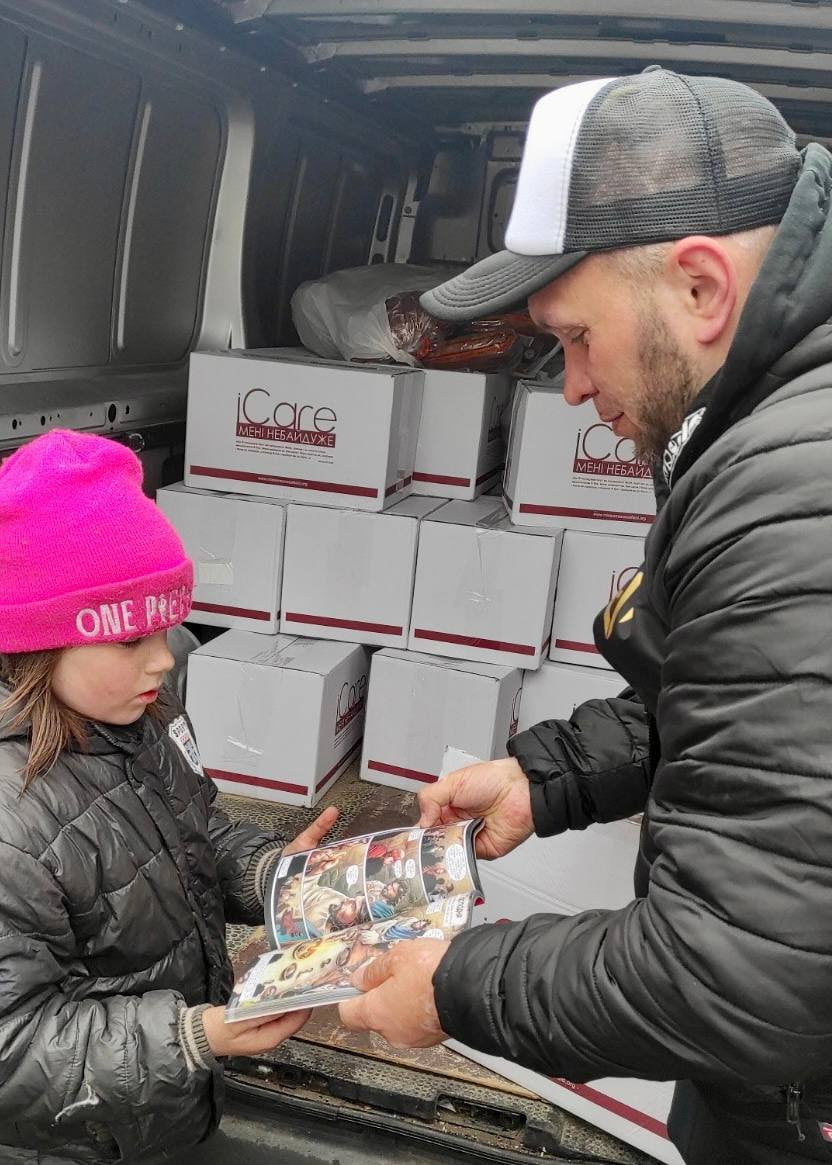 The Russian assault on Ukraine has created the largest humanitarian crisis in decades. Nearly six million Ukrainians have fled to neighboring nations and 7.7 million are displaced inside the war-torn country. Another 13 million can’t leave because of security risks, according to the United Nations.

On his most recent trip, Rakhuba, a 1995 alumnus of Moody Bible Institute, was accompanied by Wayne Shepherd, former broadcast program manager at Moody Radio and current host of several nationally syndicated radio and podcast programs, including Moody Radio’s Bold Steps with Dr. Mark Jobe. As board chair of Mission Eurasia, Shepherd wanted to see firsthand the relief work of Mission Eurasia and its partners in Poland, Moldova, and Ukraine.

“I also wanted to understand Sergey’s burden and encourage him in the task,” Shepherd said, “because he is working so very, very hard and taking this so very personally because this is his homeland; this is his family.”

Rakhuba was born and raised in the Donbas region of Ukraine, where Russia first invaded in 2014. Committed to helping refugees and displaced people, he recently helped launch three refugee assistance ministry centers in the border countries of Poland and Moldova.

“We’re mobilizing all possible resources in terms of human and financial resources to help refugees,” he says.

Food and friends in Poland

Poland has opened its heart and homes to more than three million Ukrainian refugees who have flooded the country in need of critical resources like food, hygiene items, medicine and housing. While 3,000 refugees are sheltering at a large expo center in Warsaw, many spend their days at a Ukrainian Baptist church supported by Mission Eurasia and the Warsaw Coordination Center for Ukraine Aid.

The church provides food, financial and material resources, family activities and trauma counseling for the refugees—primarily women, children and the elderly. (Most adult men, ages 18–60, must stay behind to defend Ukraine.) In one day, the church’s ministry center passed out 400 vouchers for lunch at a local café.

Over dinner with refugees, Rakhuba and Shepherd met a musically inclined family who fled from Irpin, Ukraine, when their neighborhood was destroyed. One of the young women in the family played the violin for everyone. “The family had to leave their cello and other instruments behind, which burned when their home burned down,” says Shepherd. “That just touched my heart to think about this talented family without their instruments.”

Rakhuba points out that about 50 percent of the refugees are minors and children.

“Think of the separation, the tragedy with families. Their fathers, brothers, their husbands, who stay back. There is a huge, huge need in trauma counseling and pastoral care,” he says.

To address the needs, the church, which is overflowing on Sundays with two services, has planted three more churches in the area to reach out to the refugee community.

Food is an ongoing and increasing need for refugees. “The shortage of food is at the catastrophic edge  . . . and becoming more noticeable,” Rakhuba says.

Mission Eurasia’s logistics office in Warsaw purchases and secures the bulk food that is sent in 20,000-pound shipments by semitruck to several warehouses in Poland and Moldova.

Working with churches and partners like Samaritan’s Purse, the ministry has mobilized teams to pack and deliver emergency food packages plus copies of Scripture to thousands of families in Ukraine and border countries. Paid by donors, a $50 iCare package contains enough food to sustain a family of four for a week. Already 600 tons of food have been distributed through Mission Eurasia’s efforts.

Packing party and programs in Moldova

In Moldova, one of the economically poorest countries in Europe, Mission Eurasia partners with churches that have opened their doors to refugees. Rakhuba and Shepherd visited a church in Chișinău, where pastor Alex Belev set up a packing party. Local church volunteers stuffed boxes with 25 pounds of canned meat, spaghetti, soup, sugar, and other food items, plus a Bible in each box, and loaded 500 meal packs into a truck for distribution to refugees.

Many of the volunteers are students of Mission Eurasia’s School Without Walls , which trains and equips young Christian leaders for effective ministry. Led by pastor Beleve, more than 20,000 young Christian leaders have been trained since 2004 through the non-formal, church-based program and Next Generation Professional Leaders Initiative programs.

Rakhuba refers to them as a “young army of well-equipped-for-ministry leaders on the frontlines of the crisis . . . helping people to survive, helping take care of their basic needs but at the same time doing this in the name of Jesus.”

Rakhuba and Shepherd visited a new Baptist children’s camp that is instead being used to house refugees. There a mom and dad with 10 children told of their harrowing escape from Ukraine. After getting a ride to the border, the family discovered a line of cars 26 kilometers long, so they walked in subzero weather until they got pressed in a crowd against the gate.

Although fathers with three or more children are allowed to leave the country, border guards did not allow the dad to walk through, fearing a riot. So he turned and walked down the row, begging to be let into one of the packed cars. Finally he secured a ride in someone’s car trunk and reunited with his family over the border. They arrived with only the clothes they were wearing.

When refugees cross the border, they are often overwhelmed and traumatized. Many are open to receiving not just food but spiritual help. In a Christianity Today article, Beleve said, “We just open our arms, and if they are willing, we hug them and start praying for them. In our prayer, we ask God for peace, God’s mighty mercy, and protection for everyone. The Scripture passages that we mainly share with them are those that talk about God who can restore destroyed lives, destroyed country, and about a sovereign God who can intervene into any situation.”

Indeed, humanitarian relief work is not the main focus of Mission Eurasia, but they are leading the way in responding to the great need for physical and spiritual help to the Ukrainian people.

Mission Eurasia was founded in 1991 after the collapse of the Soviet Union. Rev. Peter and Anita Deyneka used the open door to plant churches and share the message of salvation through faith in Christ in the former communist empire. Rakhuba has served as president since 2010, overseeing all their ministries in Ukraine and 13 other countries of Eurasia and Israel.

Because Mission Eurasia already had relationships and infrastructure in place to respond quickly to the Russian invasion in February, many organizations have come to them for help in networking and deploying cash and resources.

For example, when a team of Christian physicians came from Kazakhstan to offer medical help to refugees, Mission Eurasia directed them to Chernivtsi in the southwest corner of Ukraine. The doctors saw about 300 patients, Ukrainians who had come there because it was a safer area of the country.

Another partner is Feed My Starving Children, which has been providing meals to refugees in Ukraine for eight years but with greater urgency since the war began. (They committed an additional seven million meals in the last 70 days.)

“We love the model of finding Mission Eurasia—finding our very best partners around the world that can get things done, that are fearless in so many ways and are faithful in all ways,” said CEO Mark Crea in a First Person with Wayne Shepherd radio/podcast interview program.

Many refugees and displaced Ukrainians are spending their time serving other refugees. A group of 15 displaced Mennonite Brethren believers from war-torn Zaporizhzhia in southeastern Ukraine found refuge in a farm home in Mukachevo near the Polish border in western Ukraine. There they pack iCare food boxes for people in affected areas.

One of the volunteers, a Mennonite pastor, makes 1,000-mile round trips to deliver meal packs to refugees living in basements inside the war zone. On the way back, he brings people out who want to flee. “This man’s a hero,” says Shepherd.

“In listening to the refugees tell me their stories, they would all tell their stories in English or through a translator, but not once did I hear any complaint,” Shepherd says. “I never heard anyone complain. That was remarkable to me.

“Their faith in God is strong, and many others are coming to faith in Christ as a result of followers of Jesus showing love and compassion,” he adds.

Shepherd witnessed spiritual thirst throughout the trip. “People are hungry for some answers, for some truth. They’re requesting Bibles before they’re offered.”

But the spiritual battle is also evident. Recently in the city of Irpin, Russian troops destroyed Mission Eurasia’s ministry headquarters, including a warehouse filled with New Testaments, Bibles, and Gospel of John booklets.

“They even took much of that literature outside, piled it up, and burned it,” Rakhuba says.

Despite the setback, no staff members were killed, and Mission Eurasia has redoubled its efforts to get God’s Word into people’s hands. “We have a print house in the western part of Ukraine working 24/7, printing hundreds of thousands of copies,” Rakhuba says.

As the refugee crisis continues to grow, Mission Eurasia is launching Bread of Life bakeries near their refugee assistance centers in Moldova. These bakeries, which also exist in eastern Ukraine, not only provide bread, food, and jobs, Rakhuba says, but serve as a “spiritual outpost where refugees can turn for compassion from caring Christians who will share Scripture and the hope they need now—and for eternity.”