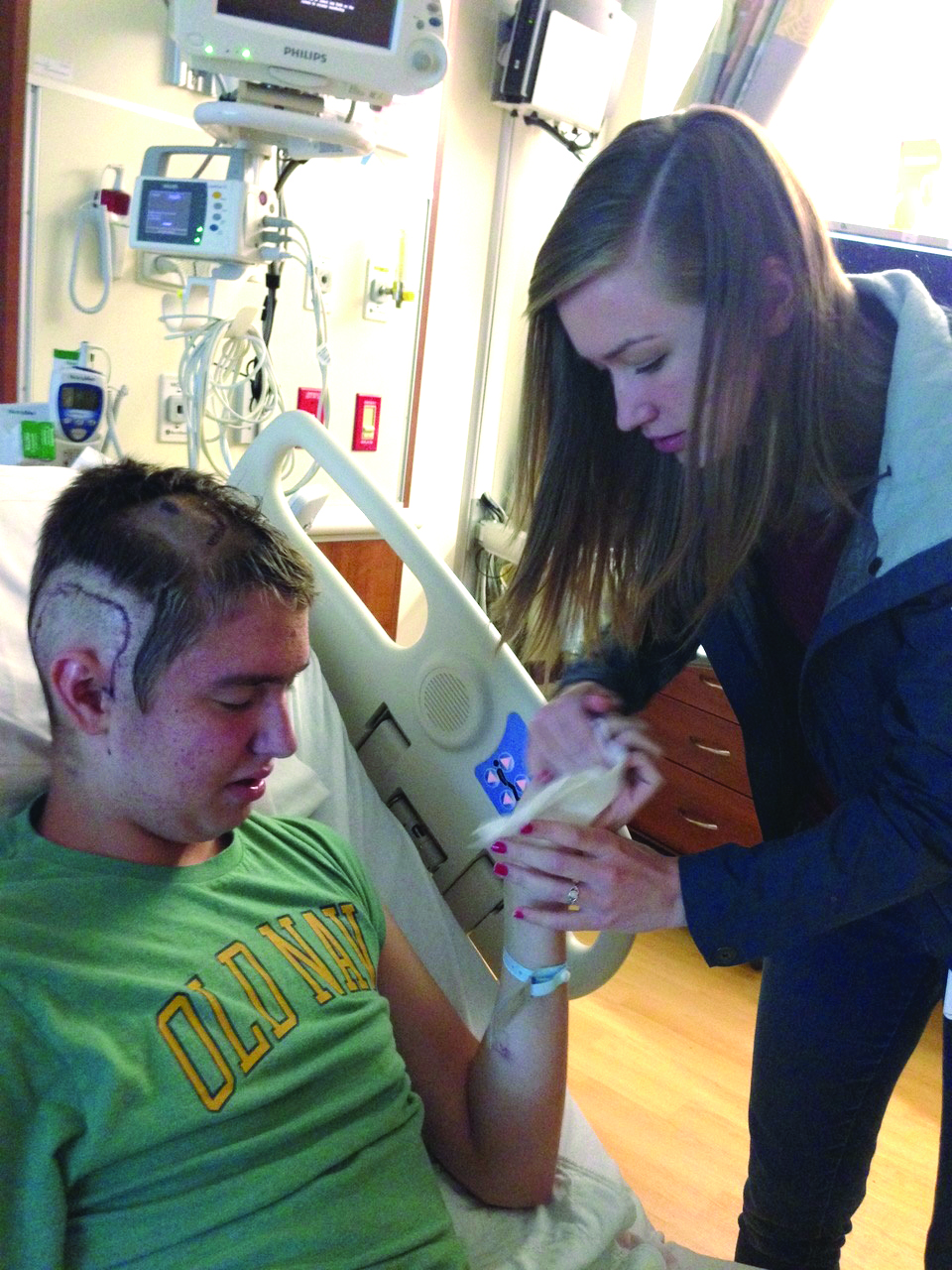 Here's Wayne, a 2021 Moody Bible Institute graduate, as a teenager in the hospital after one of three invasive surgeries to remove a cancerous brain tumor.

If granted one wish, most 16-year-olds would choose to meet a celebrity or go on an exotic vacation. It probably wouldn’t occur to them, as it did to Wayne ’21*, to wish for a new playground for children in a distant country.

Of course, most 16-year-olds don’t spend their summer in and out of surgery, with long stays at the Ronald McDonald House for treatment, stints of nausea from powerful steroids, and end-of-life discussions with their families.

In April 2015, Wayne’s life as a missionary kid in the Caspian region of Eurasia took a frightening turn when he was diagnosed with a terminal tumor in his brainstem.

“God, I don’t understand this right now,” Wayne prayed. “But I know that you are going to use this for good.”

Wayne’s family immediately relocated to the United States, where his prognosis grew increasingly grim. Through three invasive brain surgeries and six weeks of radiation therapy, Wayne was told more than once to say goodbye to his family.

A surprising request for Make-A-Wish

During this dark time, the Make-A-Wish Foundation of America approached Wayne’s family, offering him one wish.

“At that time, I was really expecting to see the Lord soon,” Wayne says. “I had no idea what I wanted to do.”

He thought of visiting Disney World but told himself, “What a letdown that will be if I’m going to Heaven soon!” Then he realized he could ask to meet a celebrity like Aaron Rodgers—“But I’m going to see Jesus soon, so what’s the point of that?”

Eventually, inspired by the story of another boy who built a playground for his school, Wayne knew what to wish for.

“In our neighborhood in the Caspian there was an old broken-down—it wasn’t even a playground,” he says. “We called it a tetanus-ground, it was so gross.” Wayne wanted to restore this to a place where children could have fun and missionaries would have opportunities to share the gospel.

New playground with a special purpose

The idea seemed impossible in a country where construction projects often drag on for years, only to falter completely. “But it happened!” Wayne says, still amazed.

Make-A-Wish received the idea with enthusiasm, the man who managed the plot of land readily acquiesced, and somehow Wayne’s family got connected with a ministry that builds playgrounds. In an incredibly short time, the overgrown plot of land and rusted equipment were transformed into a clean, up-to-date playground overlooking the city.

Best of all, “At the entrance of the playground we had a plaque with a Bible verse: ‘I have said these things to you, that in me you may have peace (John 16:33),’” Wayne says. “As far as we know, that’s the only public display of Scripture in the country.”

“That was one of the cool areas where I was able to see God work [through my illness],” says Wayne.

Today, he’s seen another impossibility come true. Six years after planning his own funeral, Wayne’s tumor, though still considered terminal, remains stable. He graduated from high school in 2015—just months after his diagnosis—and then from Moody Bible Institute with a BA in Theology in 2021. He now serves with a missions organization in the Middle East.

“My tumor could grow back at any time, technically,” says Wayne, whose uncertain future gives him uncommon evangelistic focus. But as long as his health remains stable, he wants to continue his work in the Middle East, where he can share the gospel that gives him so much hope.

* Wayne's name was changed in this blog post to protect his identity as a missionary in the Middle East.