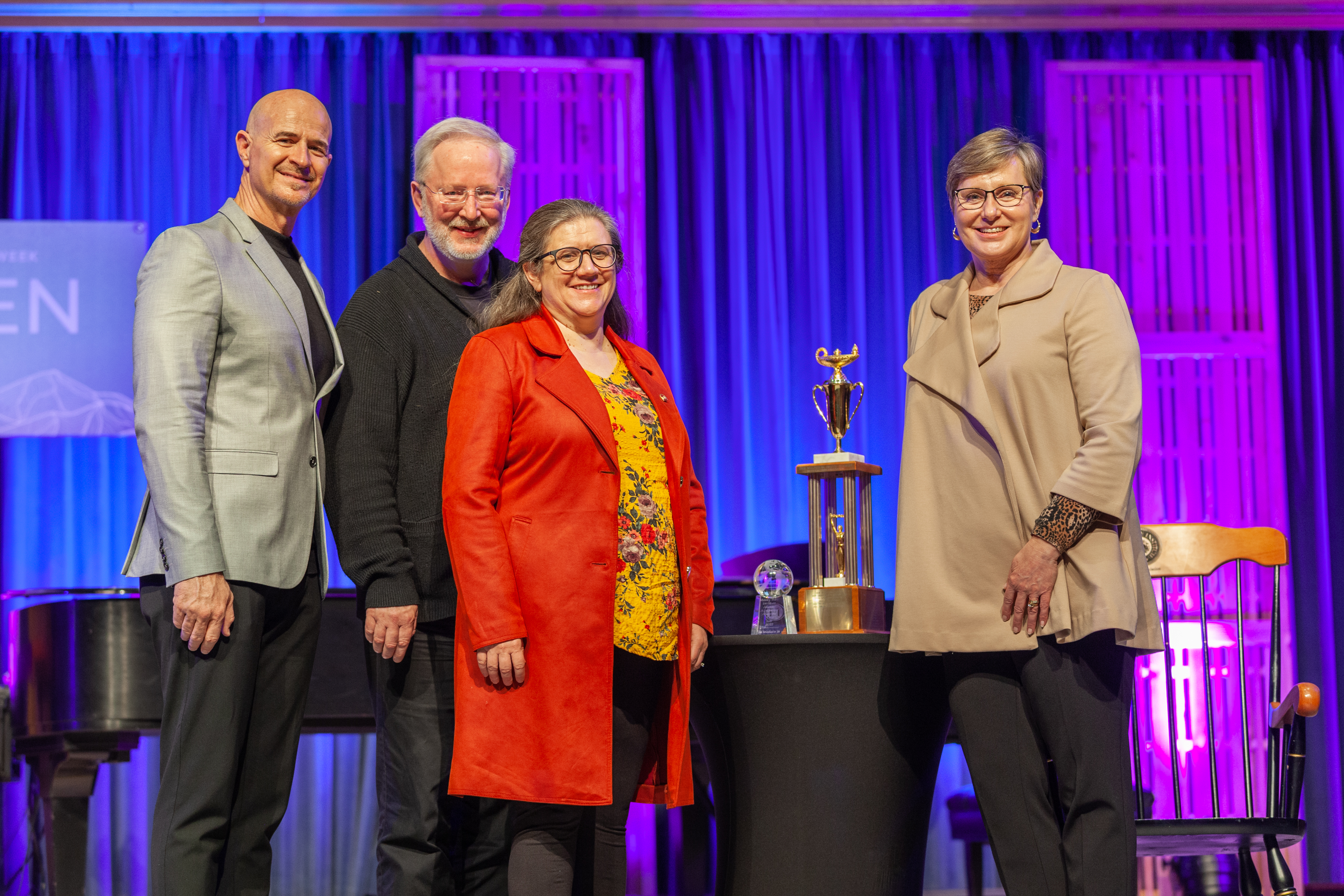 Jim and Debbie Strietelmeier receive the 2022 Alumni of the Year award from Nancy Hastings and Dr. Mark Jobe at Founder's Week February 3. Click here to watch a video about Jim and Debbie's life and ministry. Photo by Lawrence Bohlin

By Nancy Gruben and Linda Piepenbrink

In the impoverished community where Jim ’86 and Debbie (Jackson ’88) Strietelmeier have lived and served for 25 years, they are known simply by their first names. It’s an endearing sign of how beloved they are to countless residents of Indianapolis for their roles of service there.

“They have spent most of their lives ministering to the poorest of the poor on the near east side of Indianapolis,” says Ray Hashley, station manager of Moody Radio Indiana WGNR.

The Strietelmeiers are living out the values they learned as missionary students at Moody. At an award presentation during Founder’s Week on February 3, they were honored as the 2022 Alumni of the Year.

After serving for a time in South Africa, the couple returned to the US after accepting an internship at a suburban church near Indianapolis. In 1996 they began hosting a house church called Neighborhood Fellowship.

“Jim and Debbie live the life of community and really practice it,” says Cindy Hale, who serves with her husband, Mike, at Neighborhood Fellowship. “They don’t turn people away from their home. Many people have lived with them and many have come to their home for one need or another. They know that their house is a light in the darkness.”

Jim and Debbie have always been quick to spot ways they can serve the community. Among other ministries and church-planting ventures, they founded Neighborhood Academy, a free K–12 school run by volunteers that focuses on high-risk children; created the Mothers Club, a faith-based support group for matriarchs in impoverished communities; and helped establish Agape Alliance, a weekly outreach to those ensnared in prostitution and addiction.

“Jim and Deb’s service has been and continues to be marked by sacrifice and other-centeredness,” says Dr. Bryan O’Neal ’87, vice president and dean of Moody’s undergraduate school, who partnered with the couple at one of the church plants years ago.

The love, mercy, and compassion that emanates from Jim and Debbie’s lives begins in their home, where they have four biological children, two adopted children, and two foster children.

Of themselves and their church, they say, “We don’t minister to the poor; we are the poor!” And yet they consider it a most privileged position, in keeping with James 2:5: “God has chosen the poor in the world to become rich in faith.” Caring deeply for those in desperate need around them is validation of their steadfast, overflowing faith in our Lord.

Alumni: Nominate next year’s Alumnus of the Year or Distinguished Service Award. Submit your picks for an alum who demonstrates Christian character, faithful service, and loyalty to God’s Word. Visit moody.edu/alumni/about/awards.